Deputy Peck is Callie's trusty deputy and love interest. He has a mule named Clementine who may be slow but is very brave and knows how to take it easy. He likes to eat corn and prairie peppers, but his most favorite food is Trail Mix in, "Peck's Trail Mix Mix Up". Sometimes Peck can lie. He can also brag.

Peck is loyal, honest, hardworking, and kind but in "Horseshoe Peck", he is a bad sport bragging and boasting that he is the best at horseshoe tossing, until Sheriff Callie taught him a lesson about being a good sport. Also, in "Jail Crazy", when Callie made Peck the substitute sheriff so she can fill in for the mail, he became obsessed with the rules in his rulebook, that he sent everyone in jail even the singing prairie dogs for "rule-breaking". But his bossiness got the best of him when Billy Goat the Kid who broke out of another jail cell began looting the stores and cornered the cowardly Peck, until Callie came to rescue, and taught Peck a lesson to be nice and friendly regardless of the rules. In "Peck's Trail Mix Mix Up", he put a hole in his trail mix bag and thought everyone was eating it.

He is a bit of perfectionist, a little impatient, and a total neat freak. And whenever something goes wrong, he gets annoyed very quickly. Also, in "Parotting Pedro", Peck put Pedro in jail for imitating him, and eventually ran away. When Callie took Pedro to Echo Canyon, Pedro realized that imitating Peck made him feel silly and apologized. 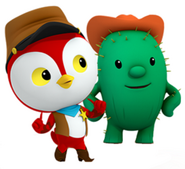 Add a photo to this gallery
Retrieved from "https://disneyjuniorpedia.fandom.com/wiki/Deputy_Peck?oldid=23695"
Community content is available under CC-BY-SA unless otherwise noted.