Jacob "Jake" is the titular protagonist of Jake and the Never Land Pirates. He is the oldest member and leader of a group of young pirates. Since the special "The Great Never Sea Conquest", Jake is now a pirate captain.

Jake is a young pirate who was given the task to protect Never Land with his crew while Peter Pan left the island to explore the outside world.

Jake is a fearless, handsome caring, daring, and natural born leader who cares very much for his crew and ship, and is easily annoyed by Captain Hook's schemes as is the rest of his crew.

Jake carries a very slender figure. He has hazel eyes, spiky black hair, rosy cheeks, light tan skin, and thick black banana-shaped eyebrows. He wears a red bandanna around his head, has a blue waistcoat, with a collar and both gold trims and each couple buttons over a white ripped V-neck T-shirt with a black crossed lace on his neckline. He also sports a gray waistband, indigo trousers, and brown bucket-top boots with gold buckles and "J" insignias on the bucket tops. His sword is also with him at all times.

In season 4, he wears a navy blue captain hat, a matching blue jacket, black trousers, and a black belt with a gold buckle. 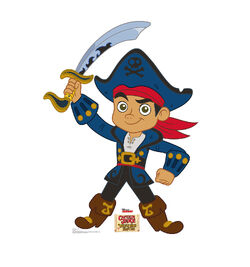 For more screenshots about Jake (Jake and the Never Land Pirates), click here.

Retrieved from "https://disneyjuniorpedia.fandom.com/wiki/Jake_(Jake_and_the_Never_Land_Pirates)?oldid=26955"
Community content is available under CC-BY-SA unless otherwise noted.