Disney Junior Wiki
Register
Don't have an account?
Sign In
Advertisement
in: Characters, Males, The Lion Guard Characters,
and 16 more

Before he became leader of the lion guard, Kion was a carefree and playful lion who was a bit immature. Despite this he still followed Simba's rules and was cautious about going into the Outlands. After assembling the guard he has proven himself to be a fierce and intelligent leader who took his role as leader of the lion guard seriously.

Although he is very open-minded he has had a small resentment towards hyenas, though he has moved past this thanks to Jasiri and learned that not all hyenas are bad.

Kion has his moments of being friendly and competitive especially towards his older sister Kiara mainly because of her catty attitude towards him, but they do eventually get along with each other and care about each other deeply.

Unlike his older sister who went to Outlands that isn't allowed, Kion is obedient to his parents.

When he got a scar over his eye after being bitten by Ushari, he started developing uncontrollable behavior, losing control of his Roar, losing his temper, getting easily annoyed, losing his patience, and sometimes getting a little violent. His anger can be soothed by eating tuliza (at first, only for it to stop working eventually), and Fuli can also act as Kion's conscience.

His negative behavior finally faded away after reaching the Tree of Life, going through therapy sessions, falling in love with Rani, and regaining control of his Roar.

Though quite similar in appearance to his father Simba, Kion bears a striking resemblance to his grandfathers, ​Mufasa and ​Nala's father. While Simba is more rounded in appearance, Kion is robust and block-like, with a square jaw and a pronounced chest. As far as coloring goes, Kion possesses a pale golden pelt broken only by patches of lighter fur on his muzzle, paws, and underbelly. His fur is several shades lighter than his father's and carries more yellow undertones as opposed to his sister's orange. This trait most likely comes from ​Nala, whose tawny color mixed with Simba's gold to result in a rich yellow.

Kion inherited dark ear rims from his father, Simba. However, Kion's ear rims are black on the top and brown on the sides as opposed to young Simba's ear rims, which are black only on the sides. Kion bears spots on the backs of his legs and the mark of the Lion Guard on his left shoulder. His tail tuft matches his head tuft in color, being somewhat bushier than his father's, and his eye rims follow the usual pattern, with the top shade being darker than his main pelt, while the bottom shade is lighter than his main pelt. His eyes are light brown.

He received a scar over his left eye after being bitten by Ushari.

He received a mark of the king on his forehead after becoming King of the Tree of Life. 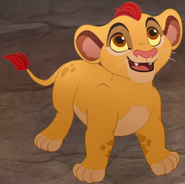 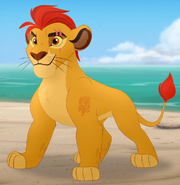