Kovu is an Outsider lion in that appears in The Lion Guard. He is the son of Zira, the adoptive son of Scar, and the younger brother of Vitani and Nuka.

Kovu is a red-brown lion cub. He has a tuft of dark brown hair, the beginnings of a mane, atop his head. On either side, fur sticks out from his chin. His forelegs have tufts of dark brown fur emerging from them. His eyes are green, with dark rims. His paws, underbelly and muzzle are a beige color, and his underbelly does not extend up over his neck. His nose is black and he has three whiskers on either side of his muzzle.

Kovu originally lived in the Pride Lands with his mother and siblings during the reign of Scar, who picked Kovu to be his heir. Sometime after this, Scar's nephew Simba returned to the Pride Lands battled Scar and defeated him, before banishing Kovu, his family and several other lionesses that were defending Scar, to the Outlands.

Sometime after that, Kovu met and briefly befriended Simba's daughter Kiara who had wandered in the Outlands. The two cubs became friends after an incident with crocodiles, but they were quickly separated by their feuding parents. Back home, Zira angrily scolds Kovu for trying to befriend an enemy but then realizes she may be able to use the friendship to allow Kovu to get close to Simba and kill him. She then praises Kovu for his brilliance, stating that he has the "same conniving mind" that Scar had.  When Kovu has grown into an adolescent, Zira sends him to the Pride Lands to initiate her plan. As part of the plan, he rescues Kiara from a wildfire that has been set by Nuka and his sister Vitani. After rescuing Kiara, he asks Simba to allow him to join the Pride Landers. Though Simba rejects him initially, it is pointed out that by law he owes Kovu a debt for saving Kiara. As repayment, Kovu is allowed to return to the Pride Lands; however, Simba still doesn't trust him. Simba chooses to reserve his final judgment until he can learn about Kovu's character and forces Kovu to sleep outside the den away from the pride. Kovu appears briefly in Simba's nightmare, where Scar turns into him and throws Simba off a cliff into the stampede (similar to how Scar killed Mufasa in the first movie). During his time at Pride Rock, it becomes apparent that Kovu has never had any real fun before. When Kiara chooses to chase birds alongside Timon and Pumbaa for the fun of it, Kovu believes it to be training. Kiara teaches him to loosen up and enjoy himself. Over time, he grows fond of Kiara and begins to fall in love with her, a feeling which is encouraged by a meeting with Rafiki, and begins to question his role in Zira's plot. Later, Simba finally warms up to Kovu and thanks him for saving his daughter's life the other day, and invites him in the den with the pride. The next morning, Kovu resolves to reveal Zira's plot to Kiara and that he doesn't want to be a part of it anymore because he loves her, but is prevented from doing so when Simba takes him alone to talk. After hearing Simba's retelling of Scar's story, he realizes how just how wrong his mother has been in her opinion of Scar. However, the two are ambushed by Zira and the Outsiders, who had been spying on Kovu and realized he was having second thoughts. Zira frames Kovu, claiming that the ambush was part of the plan. Kovu denies it, but Simba believes it anyway and quickly distrusts him. Kovu attempts to defend Simba but is knocked unconscious by Vitani. After Simba manages to escape the Outsiders, Kovu rushes back to the Outsiders to see about Nuka, who had been trapped under falling logs while trying to attack Simba. Nuka dies as a result of his wounds, and Zira angrily blames Kovu for Nuka's death, scarring him across one eye, reminiscent of Scar's appearance. In response, Kovu stands up to his mother for the first time, rejects Scar, and runs off. Back at Pride Rock, Simba believes that Kovu was behind the ambush, and exiles the rogue lion from the Pride Lands, ignoring Kiara's protests. As Kovu flees, he was being watched by Rafiki from a distance who sighs very sadly while realizing that Simba has completely defied his father's goals and broken the Circle of Life. However, Kovu later reunites with Kiara, who had run away from Pride Rock to find him. The two briefly discuss running away to form their own pride, but Kiara convinces Kovu that they need to return to try and unite their prides.  Kovu and Kiara return to find the Pride Landers and the Outsiders engaged in a bitter war, with Simba and Zira preparing to fight one on one. Kovu and Kiara manage to separate them, and Kovu publicly announces his intention to not let Zira harm either Kiara or Simba. As a result of his and Kiara's words and actions, Vitani leaves Zira's side, with the other Outsiders following her after Zira threatens to kill Vitani. When Zira attempts to attack Simba, Kovu looks on as Kiara fights her in an attempt to save her father. He sighs sadly as he sees his mother fall to her death. Simba apologizes to Kovu for his mistake and allows him to return to the Pride Lands, where he is united in marriage with Kiara by Rafiki. 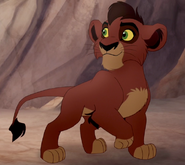 As a cub
Add a photo to this gallery
Retrieved from "https://disneyjuniorpedia.fandom.com/wiki/Kovu?oldid=23605"
Community content is available under CC-BY-SA unless otherwise noted.